Zane Codi Reynolds, out on bond for other crimes, was captured late Wednesday afternoon following his escape from Nags Head police custody Tuesday in Manteo, and an accomplice is now in custody, too.

Reynolds was arrested by Nags Head police on Tuesday after reports of a man checking doors at oceanfront homes in the area of Admiral Street and South Virginia Dare Trail, town police said.

“After an exhaustive search, officers located a suspect fitting the description underneath a home in the area,” the town said ina news release.

Reynolds, 33, was arrested and was taken to the Dare County jail in Manteo, but escaped during the transfer process, the release said.

A manhunt ensued, with Dare County deputies capturing Reynolds at 4:45 p.m. Wednesday in Manteo. Deputies also arrested Kelly Kruszewski, 34, and charged her with harboring a fugitive, the sheriff’s office said. 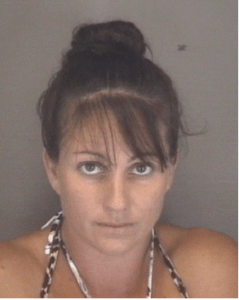 In Dare County, Reynolds faces charges of escaping the county jail, two counts of resisting a public officer, two counts of breaking and entering and one count of first-degree trespassing, Nags Head police said. He was held Wednesday night on $90,000 bond.

Prior to this week, Reynolds was last arrested May 2 after police in Kitty Hawk were called to a home on Parker Street about 12:30 a.m. Police said a resident there encountered a man with his face covered in a bandana coming out of a bedroom.

The intruder punched the victim, and a scuffle ensued, with the bandana coming off in the process. The burglar also had managed to steal $200 and an Apple watch in the break-in, Gard said.

The victim was able to identify Reynolds, who was arrested and charged with felony first-degree burglary and simple assault, Gard said. The two know each other and it’s believed Reynolds knew the victim would have some valuables in the house.

That arrest came a few weeks after he was charged April 17 in connection with an indecent exposure on the beach near Lillian Street in Kitty Hawk.

He was charged with indecent exposure, a misdemeanor, and not jailed.

Reynolds has an extensive criminal history in Dare County, including larceny and burglary convictions.