The Corolla Wild Horse Fund this week hired a contractor to temporarily fix a fence meant to keep the Outer Banks’ wild mustangs from wandering the paved roads and neighborhoods of Corolla.

The fund has been working with Currituck County for several years to try and get the fence extending into the ocean replaced, and had been told the work would be done last March.

Following Hurricane Dorian flooding, a group of wild horses have been passing through the dilapidated fencing every day to roam Corolla neighborhoods. CWHF caretakers and volunteers were spending every night out on the beaches trying to keep the horses from crossing through.

“This will hopefully give the county a little more time to continue working on plans to completely replace it, will ensure the horses’ safety for the time being, and give our staff and volunteers a breather,” CWHF herd manager Meg Puckett said in a Facebook post. 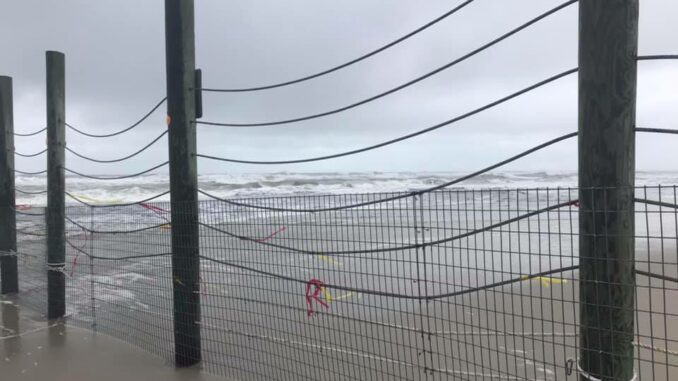 The herd’s legendary Raymond the mule — the product of a local donkey and wild mare’s affair more than 20 years ago — was among the group leaving the 4×4 beach and walking the paved roads every night. The CWHF made the decision to remove him from the beach at the end of September after a condition with his feet deteriorated due to walking on pavement.

Raymond has settled in at the fund’s rescue farm, where he will remain the rest of his days. He likely wouldn’t survive much longer in the wild due to his medical conditions, caretakers said, and seems to be enjoying the retirement life so far.

“Thanks to everyone – our supporters and volunteers, our staff and board, and Currituck County for working together to keep the horses safe,” Puckett wrote.