Why are humpback whales dying along the Outer Banks? - OBX Today

Since mid-February, four humpback whales have washed ashore dead along the Outer Banks and nearby in Virginia, a concerning trend for marine mammal experts.

The latest, a young female, was found Sunday in the surf in Corolla. A necropsy performed Monday showed she died of some sort of entanglement, said Karen Clark, director of the Outer Banks Center for Wildlife Education in Corolla.

Another whale stranded in Corolla a month earlier, on Feb. 17, and appeared to be the victim of a ship strike. That same day, a third humpback beached near Sandbridge at the Back Bay National Wildlife Refuge. No report was available on a cause of death.

Less than a week earlier, on Feb. 11, a 38-foot humpback whale washed up in the surf at Oregon Inlet. Due to the whale’s condition and position in the ocean, no cause of death could be determined.

The number of whale strandings, and marine mammal strandings in general, are elevated this year along the Outer Banks, Clark said.

Since January 2016, 89 humpback whales have stranded along the Atlantic coast from Maine through Florida. Fourteen of those have been in North Carolina and 15 in Virginia, according to NOAA statistics.

Scientists were able to perform necropsies in about half of those cases, with about 50 percent showing evidence of ship strikes or entanglements.

“Thus far these cases are right in line with other fatalities,” said Clark, who leads the OBX Marine Mammal Stranding Network.

“We’re able to look at these at a more intense depth, and we’re getting field support,” Clark said. 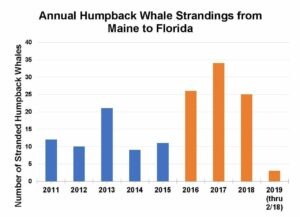 The investigations can also bring about changes to help minimize deaths.

Humpback whales migrate to the Caribbean in the winter, where they breed and give birth, then head back toward New England for the spring and summer to feed.

That means migrating humpbacks are swimming past this time of year. And many juvenile whales hang around the Mid-Atlantic to feed rather than head south for romance because they’re “still in that girls-have-cooties” stage, Clark said.

Past findings from marine mammal stranding network investigations have led to seasonal management to reduce ship strikes, such as speed restrictions in known migration paths.

The reasons for marine mammal strandings vary, from disease to parasites to environmental injuries and weather events. Many times, a cause is never identified.

Clark said a recent, unexplained boom that shook the Outer Banks doesn’t appear to have had anything to do with the whale deaths. Other often-rumored causes such as seismic testing and military operations are also unlikely. Seismic testing, while approved by the Trump administration, hasn’t begun.

As for military sonic booms and other operations, the U.S. Navy notifies the Marine Mammal Stranding Network before exercises and works with wildlife officials to minimize impacts, Clark said.

Continued investigation is crucial, not only for the sake of marine mammals, but for humans, as well, scientists say.

“Understanding and investigating marine mammal UMEs is crucial because they can be indicators of ocean health, giving insight into larger environmental issues which may also have implications for human health,” NOAA writes.

[otw_shortcode_info_box border_type=”border-top-bottom” border_color_class=”otw-aqua-border” border_style=”bordered” shadow=”shadow-inner” background_color_class=”otw-silver”]If you see a stranded whale or dolphin, don’t try to push the animal back in the water. Reporting a sick, injured, entangled, stranded, or dead animal is the best way to make sure professional responders and scientists know about it and can take appropriate action. Contact the OBX Marine Mammal Stranding Network at 252-455-9654.[/otw_shortcode_info_box]