A fast and violent storm blew across the Outer Banks on Thursday evening, downing trees and knocking out power in multiple locations on the beach and mainland, ripping shingles from rooftops in Kill Devil Hills and leaving most of the area without cable or internet.

Trees were also reported down in multiple spots in Duck and Southern Shores. WITN-TV posted dramatic video as the storm was crossing the Currituck Sound at Nor’Banks Sailing Center and The Village Tavern in Duck.

Scary images out of Duck, NC this evening as a severe thunderstorm rolled through the area. This warned storm was moving at 65 mph to the east with much stronger wind gusts along the leading edge. A weather station at the Duck Pier reported a 78 mph wind gust. Adam Smith was filming -Matt Engelbrecht

The storm hit about 6 p.m., with a fast-moving shelf cloud darkening the skies and kicking up sudden and damaging winds. Torrential rain and lightning followed before moving off and leaving behind a rainbow over the ocean.

Security video from Deborah Mennicucci as the storm rolled up her street in Kill Devil Hills:

Top wind gusts recorded in the area were 78 mph at Duck Pier, 63 mph at the Alligator River Bridge, 54 mph at Avon and 48 mph at Jennette’s Pier in Nags Head.

Northern Currituck was hit hard, with toppled trees knocking out power in the Moyock area and possibly taking out Spectrum cable and internet services as well. Spectrum reported outages of cable, internet and voice service across the Outer Banks from about 6 p.m. and continuing as of 9:30 p.m.

At Second Street and Beach Road in Kill Devil Hills, utility lines were down after the storm and both roads remained partially blocked until past 7:30 p.m.

On Clamshell Drive in Kill Devil Hills, photos by Debbie Mennicucci showed shingles torn from roofs and a large tree down.

Off Hayman Street and Bay Drive in Kill Devil Hills, photographer Bob Tenbusch captured an image of a massive water spout in the sound. 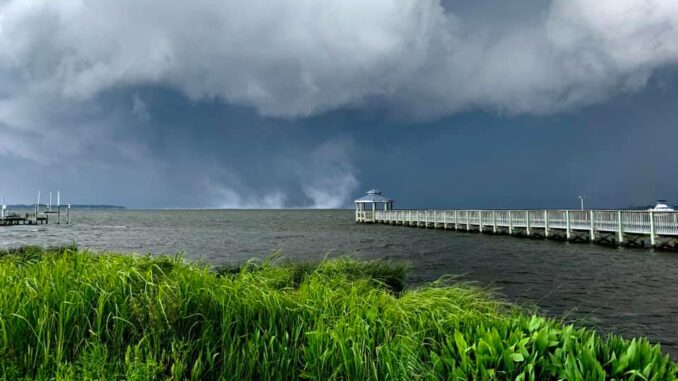 While the storm moved through quickly, left over rain from storms the previous evening caused nuisance flooding in many of the usual spots along N.C. 12 in Duck.

The initial storm seemed to move off as fast as it came, creating a colorful sunset and a brief rainbow over the ocean. The National Weather Service dropped a severe thunderstorm watch for the area as of 9 p.m.

And it could be a while before everyone has their power back on.

Hang in there! While we sleep, @DominionEnergy crews will keep working until everyone’s lights are back on.

More showers and storms rolled across the area later in the evening, with gusty winds and heavy rain.

The worst of the weather is expected to move offshore after midnight, and leave behind near-perfect conditions for the first weekend of summer.