Tuesday 2 p.m.
N.C. 12 has reopened to traffic between Oregon Inlet and Rodanthe after overwash breeched the dunes at S-Turns earlier this morning. The NCDOT says to drive with care, as there are still areas with sand and water on the roadway.

Tuesday 1:15 p.m.
Crews continue working to rebuild the dune line breeched at S-Turns by this morning’s overwash. No word yet on when N.C. 12 will reopen between Oregon Inlet and Rodanthe but it is anticipated to happen sometime this afternoon.

Tuesday 11:30 a.m.
Overwash has receded enough for N.C. 12 to reopen on the north end of Ocracoke Island. Ferry service has also resumed across Hatteras Inlet.

NCDOT says their crews are working to clear the Mirlo Beach area and anticipate reopening the road between Oregon Inlet and Rodanthe sometime this afternoon.

Updates on NC12:
OCRACOKE has reopened between the Pony Pen and the Ferry Terminal, and ferry service is resuming between Ocracoke and Hatteras.
MIRLO: The tide has receded, and our crews are clearing and placing sand for a protective dune. We hope to reopen it this afternoon. pic.twitter.com/wWLByh4YjB

Tuesday 9:15 a.m.
Moderate overwash has been reported at the usual trouble spots along N.C. 12 on Hatteras and Ocracoke islands, leading to closing of the road in multiple locations.

The dunes at S-Turns north of Mirlo Beach has been breeched and led to the shut down of N.C. 12 between Oregon Inlet and Rodanthe.

NCDOT has also closed N.C. 12 on Ocraoke between the Pony Pens and Hatteras Inlet because of overwash.

Due to ocean overwash, NC12 is now also CLOSED on Ocracoke Island between the NPS Pony Pen and the ferry terminal. Our crews will clear and reopen the area after this high tide cycle has passed. pic.twitter.com/TAaCTVv7nX

Ferry service between Hatteras and Ocracoke is also suspended until the road reopens south of the ferry dock.

Monday 6:30 p.m.
The National Weather Service office in Newport reports a caller said their neighbor walked through waist-high water after moving their car in Hatteras village this evening. Flooding was estimated at 1-to-2 feet on the road, 2-to-3 feet in low-lying areas.

Monday 6 p.m.
As a result of freezing conditions expected overnight, Tyrrell County Schools will operate on a 2-hour delay on Tuesday

Roanoke Island Commercial
All of Route 345 going into Wanchese, All businesses off of Wanchese Road to the right of Bethany Church, Mannkaniks Towing and Auto Repair, Roanoke Island Volunteer Fire Department

Monday 5:20 p.m.
Dominion Power crews continue to assess damage and work to restore electricity in multiple locations on the Outer Banks this evening. Power has been out to 120 customers in the area of Airport Road and Sunnyside on the north end of Roanoke Island and 61 customers in Swan Beach in the four-wheel drive area north of Corolla since midday.

Monday 5 p.m.
Water levels continue to rise from the Pamlico Sound on Hatteras Island, but winds have started to decrease over the last hour.

Soundside flooding has been reported on multiple stretches of N.C. Highway 12, including Hatteras village, Frisco, North Avon and the Tri-villages.

The Island Free Press reports the water is deep and almost impassible in several locations, including Frisco village and northern Avon. Residents and visitors are advised to avoid travel if possible, as saltwater can damage vehicles.

Hatteras village residents reported soudside flooding of 2-to-3 feet above ground level as of Monday afternoon, and all residents who live close to the Pamlico Sound are advised to move belongings and vehicles as needed.

Monday 3:40 p.m.
The water is coming up slowly in Hatteras village:

Water is also up on Highway 12 in Avon and Salvo…

Monday 3:30 p.m.
Starting to see a little mixing of precipitation on the mainland and in Corolla, where temperatures have dropped into the mid to upper 30s in the last hour.

Monday 3 p.m.
According to the N.C. Department of Transportation, heavy winds from the winter storm have forced suspension of all coastal ferry operations until further notice.

There is some standing water reported on several roads on the Outer Banks, including N.C. 12 on southern Hatteras Island and Ocracoke, but all roads and bridges remain open at this time.

65 secondary roads and state highways were closed due to the weather, mostly in central North Carolina and the Charlotte area as of 1 p.m. Areas in the Triad, Triangle and Salisbury area were reporting multiple downed trees blocking some roads Monday. Several secondary roads with low-lying bridges have been temporarily closed in Anson and Stanly counties.

Snow is expected north of U.S. 64, but any travel-related problems should be limited to elevated roads and bridges, where wet, slushy snow collects.

While all interstates and federal highways statewide are open, N.C. Department of Transportation crews are salting some roads and bridges, particularly in low-lying areas across the Triad and northern Piedmont. NCDOT crews are removing snow in mountain counties and are clearing secondary roads this afternoon before crews start overnight operations. Crews are also clearing downed trees in several areas. Other crews are monitoring conditions and preparing to respond should conditions worsen across the state.

Monday 2:45 p.m.
Power outages continue to be mostly scattered in nature along the Outer Banks, with the largest outage continuing around the Dare County Regional Airport with 121 Dominion customers off. An outage in Swan Beach north of Corolla is impacting 61 customers, but are mostly empty vacation rentals. 35 customers are off between the highways in the milepost 4 area around Kitty Hawk Road.

Monday 2:30 p.m.
If you’re on Nags Head’s Green Trash Collection Route, please don’t put your trash carts by the side of the road tonight because of the high winds. The town says they are delaying the start of trash collection on Tuesday until 8 a.m., so please wait until tomorrow morning to set them out for collection.

Monday 1:45 p.m.
The winds have shifted to the north, and that’s starting to push the water down the sounds.

Monday 12:30 p.m.
It’s safe to say that North Carolina has experienced all four seasons of weather in the first three days of 2022. Record highs of 80 degrees were recorded at several locations on Sunday, including New Bern and Fayetteville. Now, welcome winter:

Just a little change in air temperature compared to this time yesterday. Most of our ECONet stations are reporting temperatures 25 to 35 degrees colder than just 24 hours ago! #ncwx pic.twitter.com/rZOcii7ztN

227 customers are without power around the Dare County Regional Airport on Roanoke Island, with another 117 in downtown Manteo. 67 customers are reported in the dark around the Avalon section of Kill Devil Hills.

Monday 11:30 a.m.
The earlier tornado watch has expired, as a line of strong thunderstorms have moved offshore. A gust of 72 mph was recorded at the Alligator River Bridge at 9:33 a.m. according to WxFlow. A sensor Roanoke Sound had a 70 mph gust at 9:50 a.m.

Winds will eventually shift from northeast to north-northwest over the next several hours and are expected to blow above 30 mph sustained, with gusts as high as 50.

Meanwhile, there’s even been a burst of sunshine in Hatteras and Ocracoke villages.

There have been reports of scattered power outages, with downed limbs in multiple locations. Around 300 customers of Dominion Power in Dare and 178 in Currituck are in the dark. Tideland EMC reported around 90 members were without power in Hyde County.

Monday 10:50 a.m.
National Park Service facilities on the Outer Banks will be closing at 1p.m. today due to the weather.

And the storm has claimed our neighbor's dock on Currituck Sound. pic.twitter.com/W9irJo3Kqf

Monday 10:30 a.m.
The earlier severe thunderstorm warning for Ocracoke and southern Hatteras Island has expired. The tornado watch will expire at 11 a.m.

Monday 9:40 a.m.
The tornado watch has been cancelled for all areas except Dare County. A line of strong thunderstorms is crossing the beaches now, with wind gusts of over 40 mph, heavy downpours and frequent lightning.

A Severe Thunderstorm Warning has been was issued for Ocracoke and southern Hatteras Island until 10:30 a.m.

Taking a beating right now along the Currituck Sound. NE winds at 35, gusts to 45. Moderate rain, lightning popping off at times. pic.twitter.com/ueX5ZT0kme

UPDATED, Monday 8:30 a.m.
A Tornado Watch continues for Dare, Hyde and Beaufort counties until 11 a.m. as a line of potentially severe thunderstorms is expected to cross the area this morning.

Dare County Schools will be operating on their early release schedules today, allowing students to head home before the strongest winds are forecast to arrive after 1 p.m.

The ​ASEP ​program ​will be closed today. There will be no ​DCS ​after-school activities (sports, practices, clubs, arts, meetings, etc.) this afternoon. Student drivers will be released first at each high school.

We’ll have more updates throughout the day, so keep refreshing this story.

The combination of a cold front and powerful coastal low will bring the possibility of strong thunderstorms, high winds, along with minor ocean and soundside overwash on Monday along the Outer Banks.

A Wind Advisory is posted for the Dare mainland, all of Currituck County including Corolla and for Carova, and for Tyrrell County.

Wind gusts of 50 to 60 mph are possible along the beaches, and from 30 to 40 mph just inland after the front crosses the area and winds shift to a northerly direction. 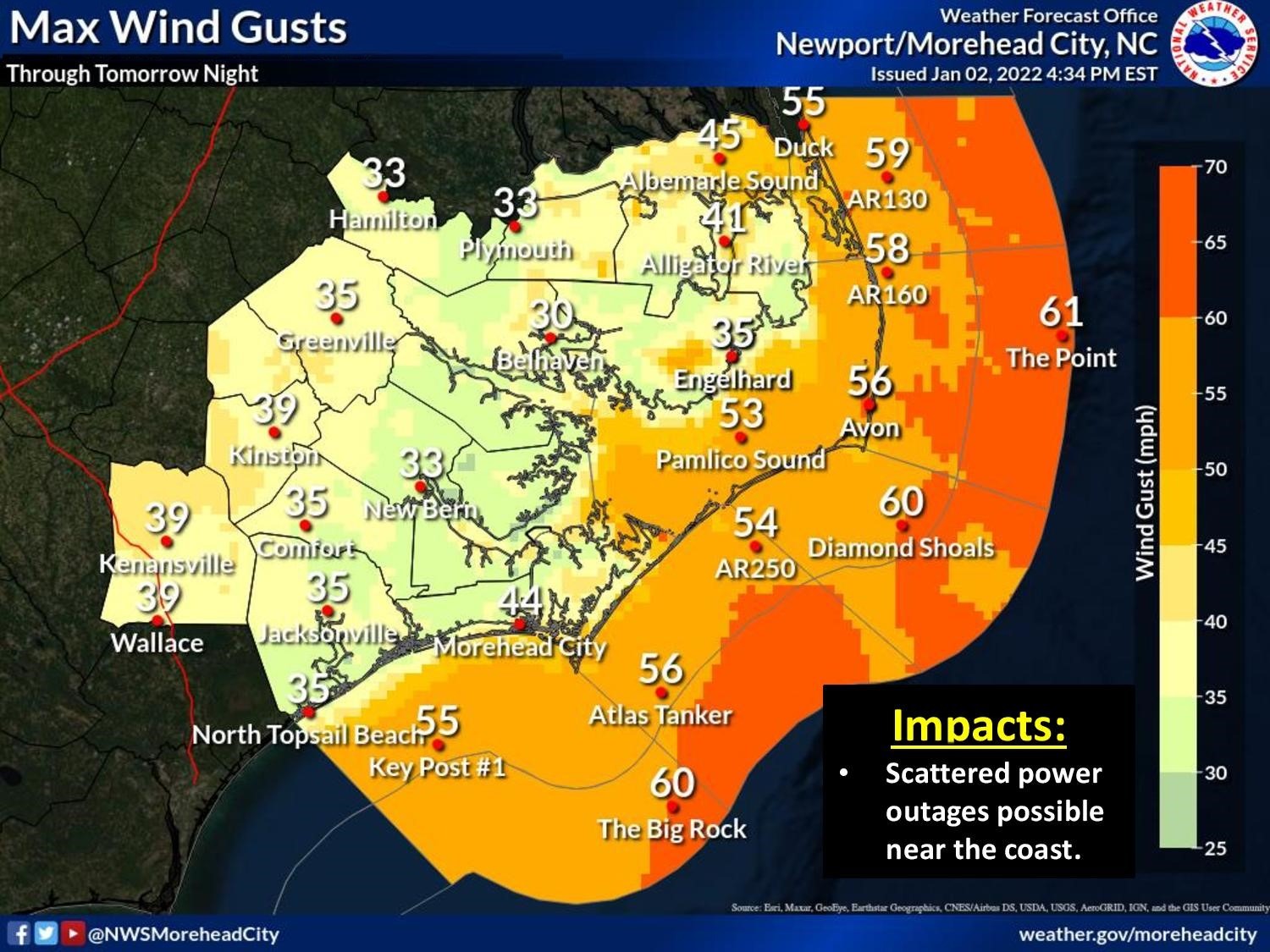 Soundside water level rises are possible while winds remain out of the south tonight and into the morning hours from Duck to Avon. When the winds shift, the soundside flood threat will shift down to Buxton, Frisco, Hatteras village and Ocracoke.

The main possibility of ocean overwash will more likely be along the south-facing beaches with high tide around 8 a.m. and 9 p.m. on Monday.

Tides are already running higher and lower than normal due to the new moon, and there is the possibility some nuisance overwash could be experienced anywhere along the Outer Banks. 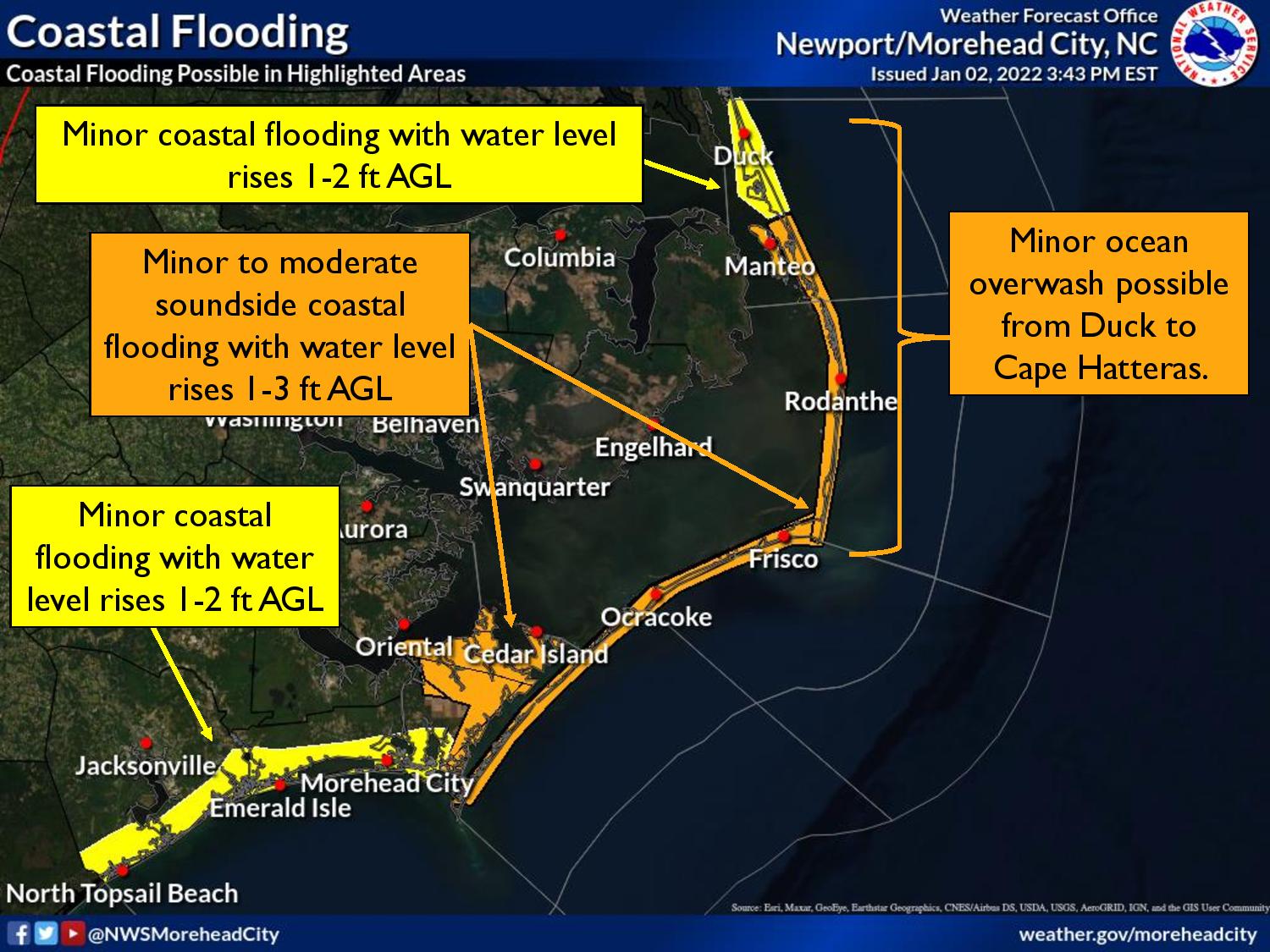 The threat of severe thunderstorms has shifted towards the central and southern parts of eastern North Carolina, but a strong thunderstorm with gusty winds and heavy downpours is possible in our area Sunday night and Monday morning.

Higher rainfall amounts are now expected to be further inland, but the Outer Banks and just inland could see between 1.5 and 2 inches of rain through Monday. 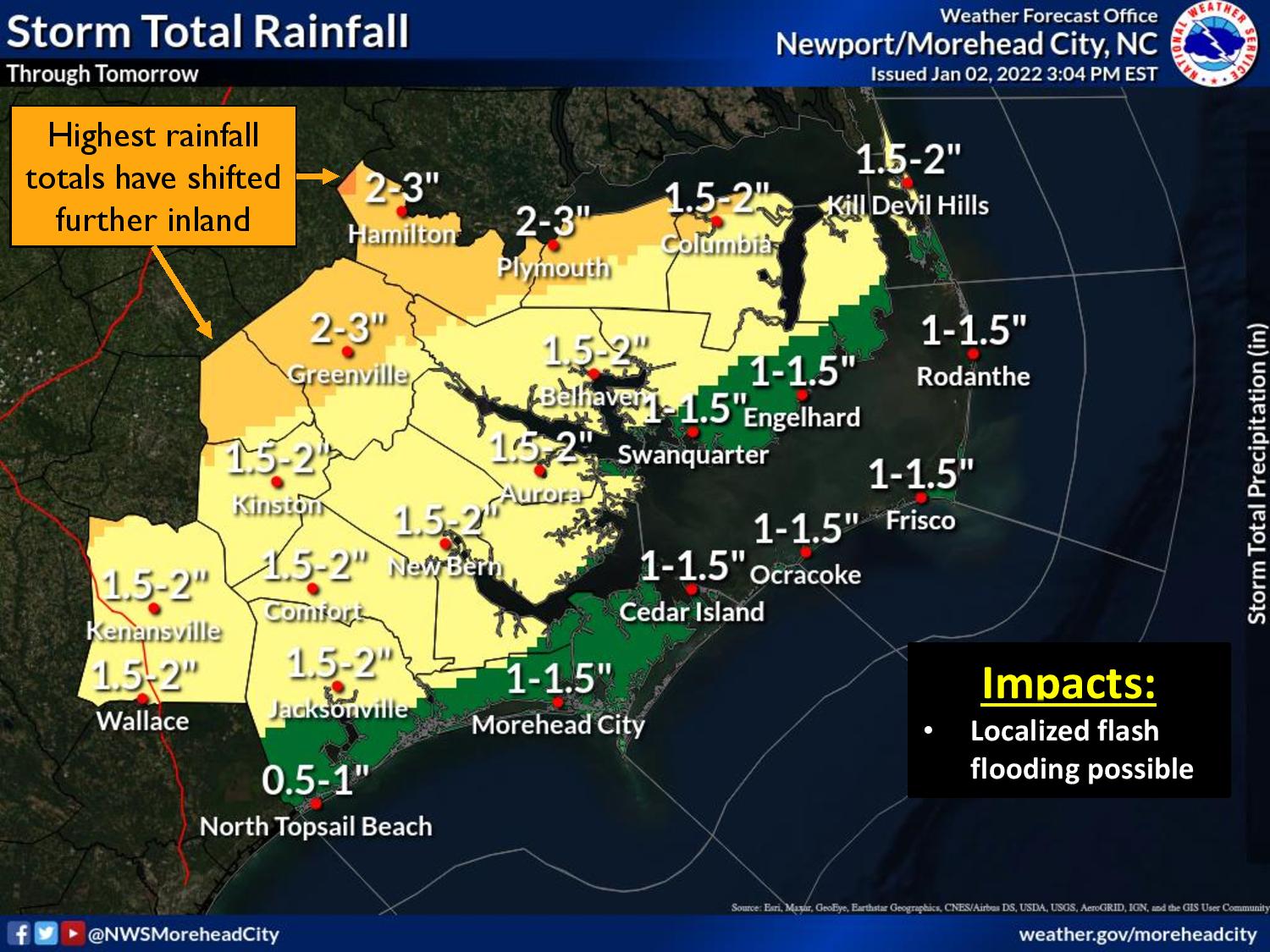 The rain could not come at a better time, as the final four months of 2021 is expected to go down as one of the driest in decades in eastern North Carolina, leading to much of the region to end the year in severe drought conditions.

And after a mild Christmas and New Year’s week with near record temperatures, it will feel a little more like winter to start the week.

There is potential of some rain/snow mix to develop over some inland areas Monday afternoon as temperatures fall with lingering showers. Any accumulations are very unlikely due to ground temperatures that are rather warm for early January.