With in-person instruction returning Monday for many Outer Banks school students, its a good time to review the rules of the road when it comes to school buses on North Carolina’s highways.

School zones along U.S. 158 are clearly marked with flashing lights and signs in Kitty Hawk and Nags Head at the elementary schools.

The speed limit on Croatan Highway drops to 35 mph in the mornings and afternoon adjacent to the schools.

Drivers should also be aware to stop in all directions of travel when a school buses’ red flashing lights are on and the stop arm is extended on all roads with four lanes or less.

However, under North Carolina law, traffic coming from the opposite direction along the five-lane U.S. 158 can continue traveling because there is a dividing turn-lane between the travel lanes. 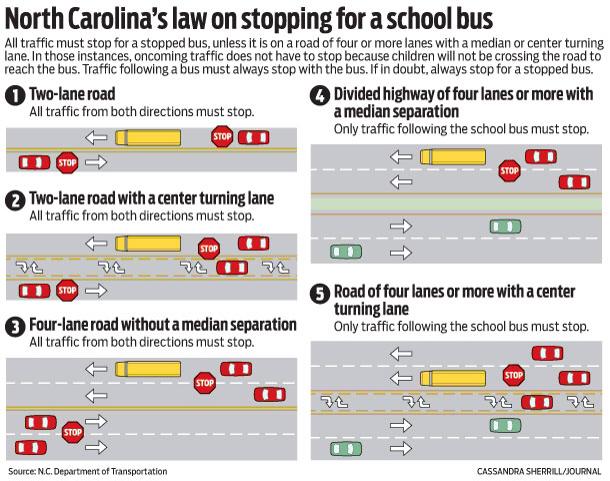 Motorists are encouraged to assist the Highway Patrol in reporting dangerous drivers by dialing *HP (*47) from their mobile device. Callers are requested to provide their location, nature of offense observed and description of the vehicle in question.

There were more school-age pedestrians killed between the hours of 7 and 8 a.m. and between 3 and 4 p.m. than any other hours of the day.

A new law passed in 2017 increases the penalty for passing a stopped school bus to at least $400, and allows images from cameras on school buses to be used to issue tickets like those given to drivers that run red lights at intersections.