While many boats laid low for Day 2 of the 39th Annual Pirate’s Cove Billfish Tournament, that was certainly not the case for Day 3.

Jay Jones fishing aboard the Sniper kicked things off at 8:50 a.m. by catching and releasing the first fish of the day: a blue marlin.

Blue Sky, a 60 Spencer from Georgetown, South Carolina, scored three white marlin and one blue to take the overall lead with 650 points going into the final day of competition.

“We were super close, about 30 miles east of the inlet,” Weaver explained to Capt. Dave Lear of PCBGT.com. “There was a lot of bait around and all our bites were associated with the bait. We didn’t see any birds and not many flyers, but every now and then a tuna would pop up. We caught one marlin right off the daisy chain that we thought was a tuna at first. Water temperatures were 79 to 79.5 degrees. We missed a couple more whites, so overall it was good fishing.” Weaver said there were other boats in the area and he would likely head to the same spot on Friday.

Right Hook, a 58 Croswait captained by Austin Spitz, took the Top Daily prize of Day 3 with four billfish, including a Grand Slam (blue, white and sailfish), for a total of 550 points after a five-minute lead.

Only one day left to see which vessel takes all!
Live coverage of the tournament can be found at PCBGT.com, with radio reports by Capt. Marty of all the catches throughout each of the four days.

Capt. Marty also joins Autumn on BIG 94.5 WCMS from 4:30 to 6:30 each afternoon to provide up to the minute reports on all the action. 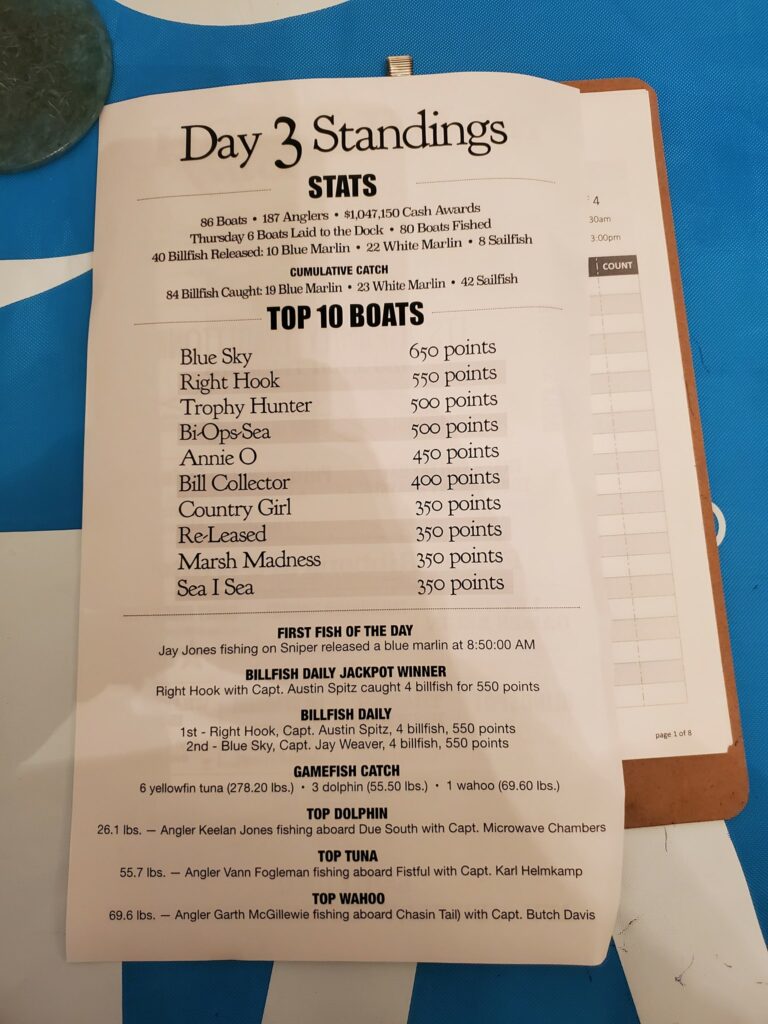