An area of disturbed weather in the Atlantic near the Bahamas is expected to get better organized in the next few days, and could become a tropical depression just offshore of the Carolinas as we reach the peak of hurricane season this week.

Even if it does not develop, the moisture from that system, what’s left of Hurricane Nicholas currently impacting Louisiana and an approaching cold front will bring us better chances of showers and thunderstorms to wrap up the work week. 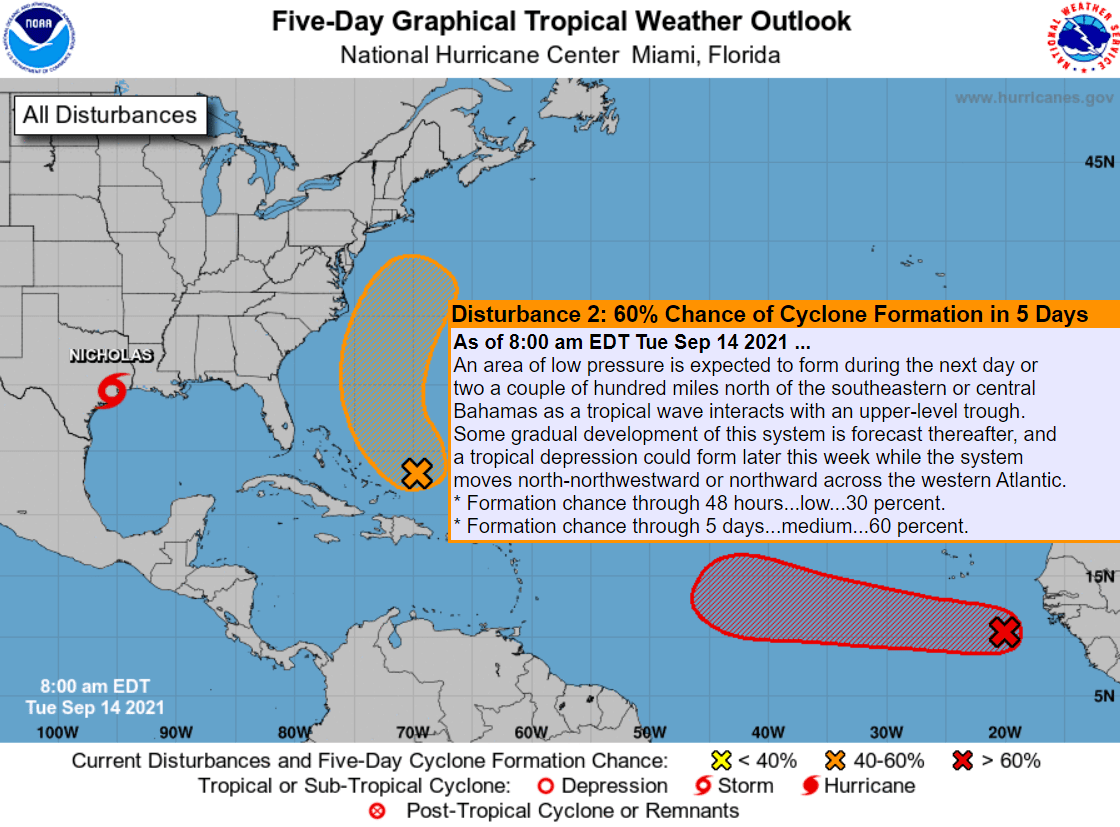 “While there is still a lot of uncertainty about potential formation, the most likely impacts that we can convey with some confidence at this point are an increase in rip current threat along the beaches late this week into the weekend and some deterioration of marine conditions,” said forecasters at the Newport/Morehead City National Weather Service office.

In the Gulf of Mexico, Nicholas became the eighth tropical cyclone and fourt hurricane to make landfall in the United States this year as we hit the halfway point of the 2021 season. The average for an entire season is just three.

Six hurricanes and 14 named storms have now formed, the average for an entire season with 11 weeks remaining.

The main threat from Nicholas is up to 15 inches of rainfall possible along mainly southern Louisiana which is still trying to clean-up from Hurricane Ida three weeks ago.

A tropical wave just emerging off the coast of Africa is currently expected to follow a similar path to Hurricane Larry that passed east of Bermuda and brought high surf to the Outer Banks last week.

The next names on the Atlantic tropical cycle list are Odette, Peter, Rose and Sam.

Hazy conditions are expected again today and tomorrow along the Outer Banks, as smoke from the wildfires in the western U.S. and Canada has once again streamed across the continent through the upper atmosohere.