Forecasters say the 2020 Atlantic hurricane season will likely get a head start for the sixth year in a row, as a developing low off Florida is expected to become Tropical or Subtropical Storm Arthur over the weekend.

The system is expected to stay offshore of the southeastern United States, according to the National Hurricane Center.

But large surf and deadly rip currents, especially for the south-facing beaches of the Outer Banks, are likely into early next week.

Other significant impacts from the system are largely unknown as of Thursday evening, according to the National Weather Service Newport/Morehead City office.

The National Hurricane Center said a trough of low pressure was located over the Straits of Florida on Thursday producing disorganized shower activity and gusty winds across the Florida Keys, portions of extreme South Florida and the Northwest Bahamas.

Gradual development of the system is expected, and it will likely become a tropical or subtropical storm by late Friday or Saturday when it is located near the Northwest Bahamas. 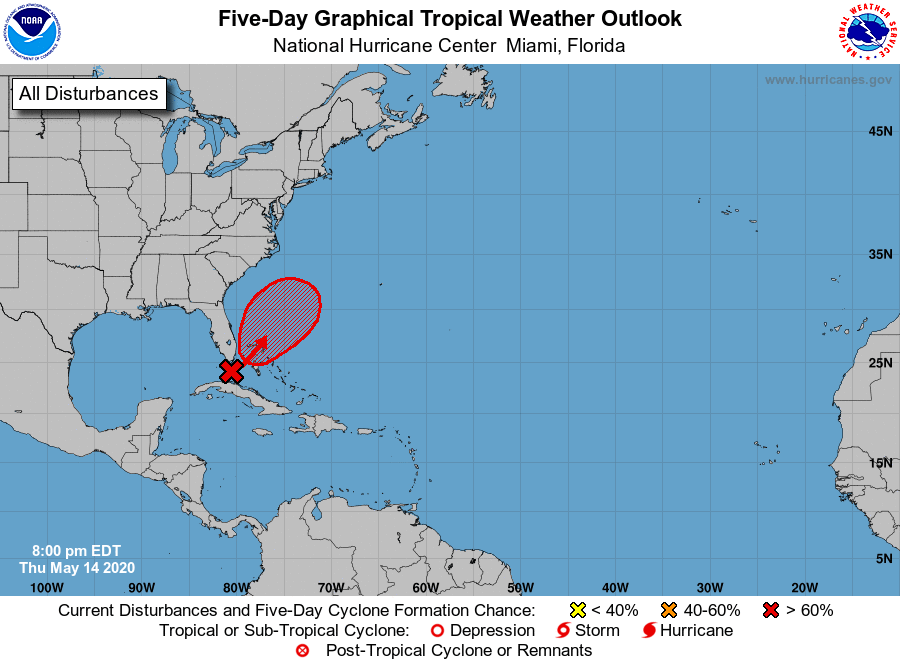 Later in the weekend and early next week, the system is expected to move generally northeastward over the western Atlantic. An Air Force Reserve Hurricane Hunter aircraft is scheduled to investigate this system on Friday.

Regardless of development, the disturbance will continue to bring heavy rainfall to portions of the Florida Keys, Southeast Florida and the Bahamas through Saturday.

Tropical-storm-force wind gusts are also possible across that area during the next day or two. In addition, hazardous marine conditions are expected along the Florida east coast and in the Bahamas where Gale Warnings are in effect.

There has been at least one named tropical system ahead of the official start of hurricane season on June 1 in each of the last five years. Forecasters at N.C. State University are calling for an active 2020 hurricane season in the Atlantic.