By Joy Crist, IslandFreePress.org
The Ocracoke Express passenger ferry between Hatteras and Ocracoke village will wrap up its 2020 season on September 10, and although the ferry had a shortened season due to both funding and COVID-19 concerns, roughly 7,127 passengers have taken a ride as of September 7.

Passenger ferry service in 2020 did not begin until July 3, and service was also temporarily interrupted in early August due to Tropical Storm Isaias. The seasonal ferry, which officially launched in 2019, traditionally runs from late spring until shortly after Labor Day.

The Ocracoke Express carried nearly 29,000 passengers between Ocracoke and Hatteras islands during its inaugural season in the summer of 2019. The ferry makes three daily round trips between Hatteras and the Silver Lake Terminal, which is located in Ocracoke Village.

Only a few more days left to ride the #OcracokeExpress this year. Have you shown us pics of your #FerryCoolMask?

🙏 Thank you to 97-y/o #WWII Veteran Lenard Terry Jr. who joined us with his family.

📸 Use the hashtag and show us your masks! pic.twitter.com/A4pvRdk7JL

Passengers may still purchase tickets for the ferry’s last day of the season on Sept. 10 via www.ncferry.org or by calling 1-800-BY-FERRY, or by heading directly to the Hatteras or Ocracoke-Silver Lake Terminals. 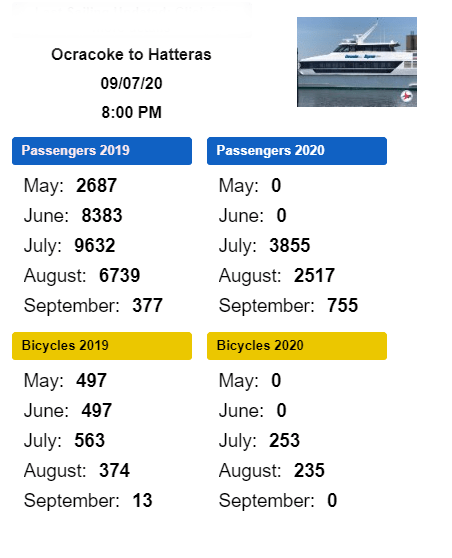