A struggling and cold-stunned 120-pound loggerhead sea turtle was transported to the STAR Center in Manteo after a physically-demanding endeavor that required a harness, a roughly half-mile trek, and a lot of manpower from a makeshift team of volunteers.

Frank Welles, the Hatteras Island Coordinator for the Network for Endangered Sea Turtles (NEST), spotted the motionless sea turtle in the Pamlico Sound during a routine patrol in his kayak.

Local volunteers regularly monitor the Hatteras Island shorelines after a cold spell, looking for cold-stunned sea turtles in need of assistance. As cold-blooded reptiles, sea turtles derive heat from their surroundings, and when they become too cold, their metabolism slows, prohibiting them from moving, and from migrating to warmer waters.

The volunteers primarily search for stranded turtles along the soundside, covering private property in the villages and areas that are not routinely patrolled by the National Park Service. Welles, for example, lives near the Frisco Woods Campground, so he patrols his own backyard, as well as the long stretch of soundfront that borders this corner of Frisco.

“When the water temperatures get down into the 40s, that’s when everyone turns out and starts looking,” says Welles. “Almost always when we get cold weather, it’s accompanied by north to northwest winds, which pushes the cold-stunned turtles closer to [shore.]”

Welles says it’s unusual to find large sea turtles in trouble, simply because of their size. “Generally, we get around 3 to 5 of them a year,” he says. “Because they are so much bigger, they will tolerate a lot more cold than smaller turtles, but this guy was probably not feeling good, as well… His shell had a lot of [marine material] growing on it, so that’s an indication that he was not swimming at full speed.”

Once Frank spotted the turtle about 30 feet into the Pamlico Sound, he connected with local volunteers, including Lou Browning of Hatteras Island Wildlife Rehabilitation. Welles says he also had a couple of friends who just happened to be visiting, (and who work in domestic animal rescue), and they joined in the transportation efforts as well. 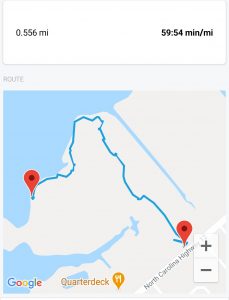 The team of five then gently hoisted the turtle into a harness to transport it to a waiting car roughly a half mile away. “I had to paddle the boat back, so I skipped the hard part,” says Welles with a laugh. “I left them to do all the work, and I just paddled home.”

The harness has four handles, so the team of five volunteers took turns gently lugging the loggerhead back to shore. “It was a good hour from when I found it to when we got the turtle back to car,” says Welles. “We then transported it to the Buxton Staging Site, and [representatives from] Nags Head came and took it back to the aquarium.”

“I joke that we need a helicopter for transportation sometimes,” says Welles.

When he initially spotted the sea turtle, Welles was not sure if the turtle was alive due to the lack of motion, but subtle movements along the way indicated that the loggerhead was holding on, and could be rescued. “This story has a happy ending.”

The amount of sea turtles that the Hatteras Island volunteers rescue can vary greatly from year to year. The winter of 2019 / 2020 was a particularly busy season, with more than 100 sea turtles rescued after a single cold snap in January alone.

But Frank says that with the more mild temperatures over the past few weeks, this winter – so far – has been somewhat uneventful.

“It’s probably going to be a record-slow season this year, which is very good news for the turtles,” says Welles. “But whenever you’re around the water in the winter, always keep an eye out for cold-stunned turtles, and especially after a cold snap, which is when they will appear.”

How You Can Help: