It’s probably no surprise that the Outer Banks, famed for the Lost Colony and known as the Graveyard of the Atlantic, has its fair share of ghost stories. Here we take a look at few of them. Happy Halloween!

Haunted hunting retreat in Corolla
Whalehead in Historic Corolla, a hunting retreat built in 1925, has been known to house a haunt or two over the years. It was once the home of an all-boys’ school, a base for the Coast Guard during World War II and a rocket fuel testing site.

Ghost tours are available at the Whalehead June through the end of August each season.

More to read: The haunted room at Currituck Light

The Goat Man
The Goat Man of Nags Head woods was said to live in a yellow shack and scare anyone who dared approach.

One legend suggests the man’s home was vandalized by teenagers and his goats killed, leading to his reign of terror, but tales of a goat-human hybrid aren’t restricted to the Outer Banks.

Maryland boasts a half-human, half-goat maniac wielding an ax, while Kentucky’s got the Pope Lick Monster, a human/goat/sheep creature who lives beneath a bridge in Louisville. Texas also has its down Lake Worth Monster, another goat-human hybrid. There’s a common theme in all of the urban legends: a mistreated monster now out for blood.

Blackbeard’s ghost
To this day, the ghost of the pirate Blackbeard is said to haunt Teach’s Hole, the spot on Ocracoke Island where he lost his head in a battle with the British Navy on Nov. 22, 1718.
After being shot and killed, the British Navy chopped off Blackbeard’s head and hung it from the bowsprit of their ship.

“Ever since then, it’s been said that Blackbeard’s ghost haunts the spot known as Teach’s Hole,” North Carolina Ghosts writes. “Many people have reported seeing a strange light moving beneath the water in the cove. This ghostly light is thought by some to be Blackbeard’s spirit, swimming through the waters, searching for his missing head.”

More to read: The Flaming Ship of Ocracoke 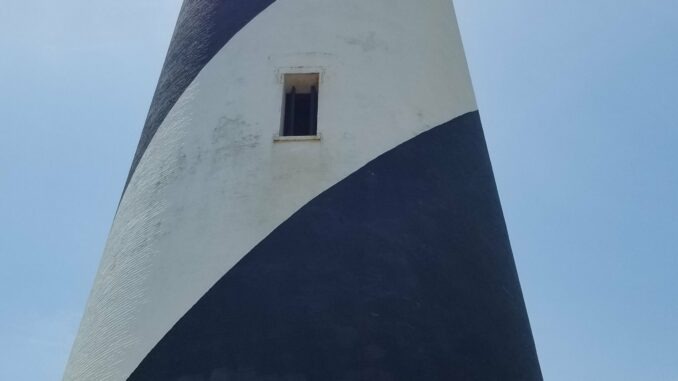 The ghost ship of the Outer Banks
In January 1921, a massive schooner called the Carroll A. Deering was found completely abandoned aground off the shoals at Cape Hatteras. The ship, traveling from the Barbados to Hampton Roads, first passed the Cape Lookout Lightship, then the southeast of the Diamond Shoals Lightship, apparently with crew members on board, milling about the deck.

Due to heavy seas, surf boats couldn’t reach the ship as it floundered on the shoals, but a rescue ship reached the vessel on Feb. 4, 1921 and found an eerie scene.

“Upon investigating the ship, it was discovered that all personal belongings, key navigational equipment, certain papers, and the ship’s anchors were missing. Furthermore, food was laid out as if in preparation for a meal. But there was no sign of the crew,” Cape Hatteras National Seashore writes on its website. No sign of them was ever found.