Fireworks on the Outer Banks: What’s legal and what’s not - OBX Today

Let’s talk fireworks. They’re a beach tradition as ingrained as building sandcastles and chasing ghost crabs. But any firework that leaves the ground is illegal in Dare County. And in some towns, all fireworks are illegal, sparklers and coiling snakes included.

In Dare County, Kitty Hawk and Kill Devil Hills, the local ordinances follow North Carolina law, banning bottle rocks and mortars and anything that leaves the ground or has a report or “bang.” Pyrotechnics, commonly known as “safe and sane” fireworks, are the only ones allowed in North Carolina. They include caps, snakes and glow worms, smoke devices, trick noise makers, sparklers and other sparkling devices such as fountains.

Anyone violating the fireworks ordinance faces a Class 3 misdemeanor, a mandatory court appearance and $250 fine. But the law appears to be rarely enforced. 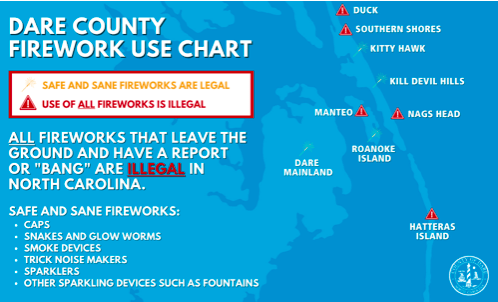 In Duck, the sale of fireworks is permitted, but the use of all fireworks – including sparkers, smoke bombs, snake pellets and the like, is prohibited. Southern Shores, Nags Head and Cape Hatteras National Seashore also prohibit all fireworks of any kind.

The town of Manteo’s law prohibits the “shooting of firecrackers, sky rockets, Roman candles or other fireworks of any description” in town.

On Cape Hatteras National Seashore, it is illegal to detonate fireworks, or have fireworks in your possession, on all land managed by the National Park Service, including all beaches from the Nags Head border through Hatteras and Ocracoke islands.

In addition to fireworks being illegal and a fire risk to local communities, the personal use of fireworks can be a significant nuisance to humans, pets and wildlife.

Seashore rangers will be patrolling the beaches throughout the upcoming Independence Day weekend.

“Visitors are encouraged to travel to the south end of Ocracoke Island or the National Park Service’s Avon Fishing Pier on Hatteras Island to view the only two permitted fireworks shows within the Seashore,” said David Hallac, superintendent, National Parks of Eastern North Carolina. “Leave your fireworks at home.”

The Outer Banks frequently experiences strong breezes as well as the occasional high winds, and many of the beach cottages and homes in the area contain wooden shingles, wooden decks and wooden walkways that lead from the beach to the property.

Wind, wood, dry dune grass and fireworks are a dangerous combination any time of year—and the Fourth of July is no exception.

“To ensure the safety of yourself, your family and your property this Fourth of July, plan on staying safe and heading to one of the local fireworks shows that is being put on by professionals,” the county said in a news release.

The week of the Fourth of July holiday is also a tough time for veterans and pets. Fireworks are a known trigger for PTSD. And more pets go missing during this holiday week than any other time of year.