The driest November in North Carolina in nearly a century has pushed the entire state deeper into drought, and severe drought conditions are now being experienced in mainland Dare, northern Hyde, and all of Tyrrell and Washington counties.

In past droughts, those same areas including several wildlife refuges have been prone to wildfires that have burned the nutrient-rich peat soils for months.

A statewide burning ban remains in place, with the ban expanded to include no open fires within 100 feet of any structure in Dare County’s unincorporated areas and a ban on beach fires in Cape Hatteras National Seashore and the Town of Nags Head.

Corey Davis, North Carolina’s assistant state climatologist, told the News & Observer, “Fire is almost a symptom of drought more than anything. Any time you start to get the landscape drying out, things will burn more easily.”

One wildfire has burned more than 1,000 acres of Pilot Mountain State Park northwest of Winston-Salem, while several other highly-visible wildfires have been sparked on other North Carolina mountains.

The Pilot Mountain fire is blamed on a campfire that was set in an unauthorized area that got out of control.

In the last 30 days, we have only seen 10-50% of the normal rainfall we would for most locations in eastern NC. This has caused grass, leaves, and forest grounds to become very dry fuels for potential wildfires.
Stay updated:@ncforestservice https://t.co/JGFXUjCmJg pic.twitter.com/BUM3QgCJPI

The last time Severe Drought was in place at this time of year was in 2016, although at that point, the drought in the southern Mountains was beginning to improve with the onset of December rainfall, Davis said.

Severe Drought, known as D2, is the second level of four drought stages on the U.S. Drought Monitor, according to the report issued Thursday.

In the spring of that same year was when the Whipping Creek Fire burned over 15,000 acres in Alligator River National Wildlife Refuge in Dare and Hyde counties and the Dare Bombing Range.

While the summer of 2016 was wetter than normal, helping ease drought conditions somewhat, it took Hurricane Matthew in October to finally bust that drought with its record-setting rainfall and flooding.

Another serious drought year was in 2011, when the Pains Bay Fire burned over 45,000 acres of the refuge and bombing range while threatening to spread into the village of Stumpy Point.

That fire smoldered in the peat soils for months until rains from Hurricane Irene at the end of August finally put it out.

Both of those fires created smoke plumes visible from more than 100 miles away, and would blanket the Outer Banks with a thick, acrid haze for days when the winds blew the right direction.

While the Pains Bay fire started from a lightning strike, the Whipping Creek fire was blamed on a manmade source when sparks from a mower working along U.S. 264 started a grass fire on the road shoulder that quickly spread.

“This year, it appears our drought is only just beginning, particularly entering a La Niña winter that so far is making good on its promise of warmer and drier weather,” said Davis.

The central Coastal Plain including the Albemarle peninsula has also seen the emergence of Severe Drought as part of a drastic seasonal turnaround. And after its wettest summer on record, Greenville recorded its 5th-driest fall with 3.82 inches of precipitation, according to Davis.

One of the lone wet spots in the state last month was Cape Hatteras, which measured 4.84 inches of rain total, mostly from offshore moisture ahead of a cold front on November 12.

“While that was only 0.06 inches more than the monthly normal precipitation, they still fared better than the rest of the state,” Davis said. 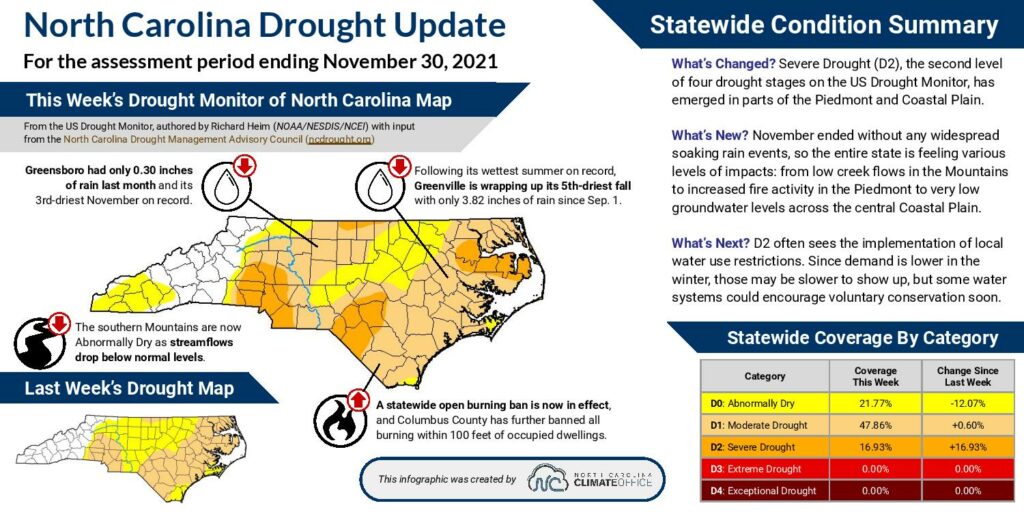 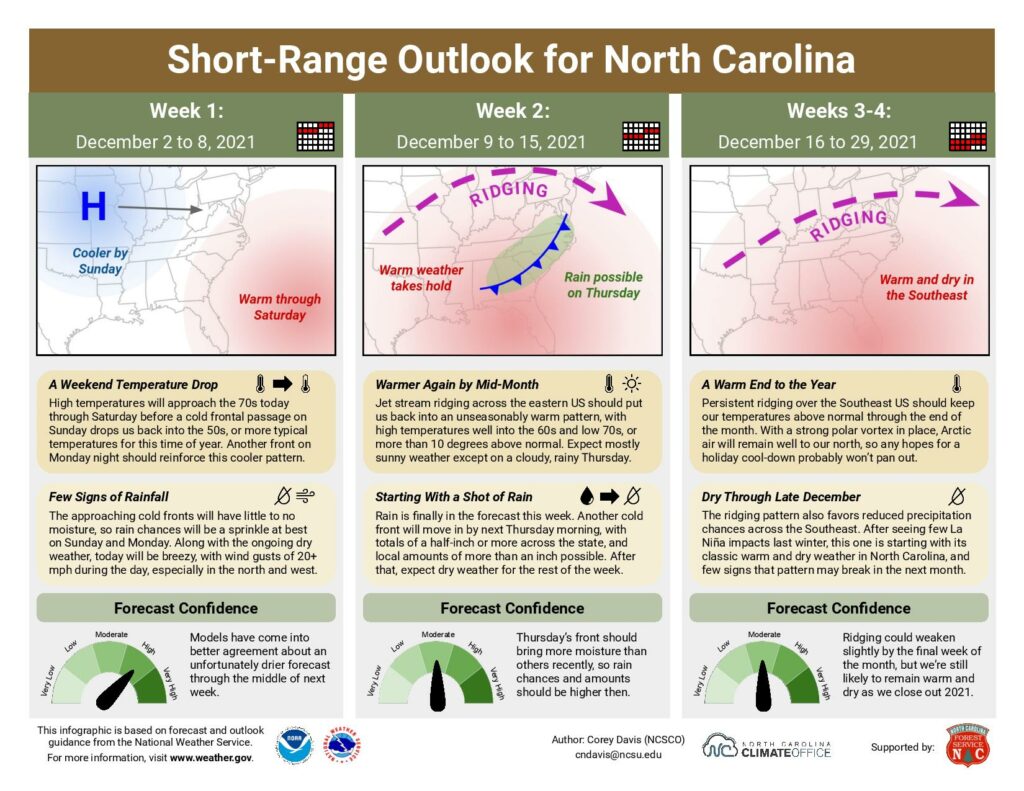