The National Hurricane Center says that an area of disturbed weather off the northwestern Bahamas could become the ninth tropical system of 2019, with a strong possibility that it will eventually become Tropical Storm Humberto.

Forecasters say that all of eastern North Carolina needs to monitor the situation, as there could be some impacts by the middle of next week. But there are still a lot of unknowns heading into this weekend.

Uncertainty in the forecast for Potential TC #NINE is higher than normal, including its possible impacts to Florida. For more information specific to your area, follow updates from your local NWS office: @NWSMIA @NWSMelbourne @NWSJacksonville @NWSTampaBay @NWSTallahassee

At 5 p.m. on Thursday, the center of Potential Tropical Cyclone #9 was located about 235 miles southeast of Great Abaco Island in the Bahamas. Maximum sustained winds were at 30 mph with higher gusts.

The system is expected to move toward the northwest near 8 mph, and this motion is forecast to continue during the next 2 days. On this track, the system is anticipated to move across the northwestern Bahamas on Friday, and along or over the east coast of central Florida on Saturday.

Once the system moves on to the Florida Peninsula, it is forecast to weaken to a tropical depression and then move back out over the Atlantic by the end of the weekend.

Tropical storm force winds could be experienced in the southern and central coastal sections of North Carolina on Monday, according to the hurricane center. 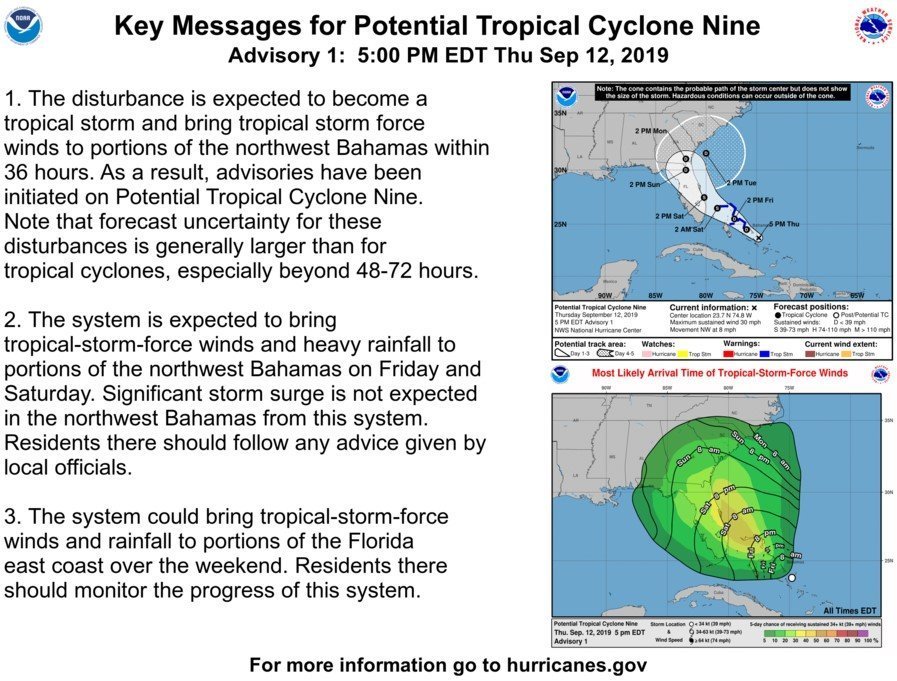