The 2019 Atlantic hurricane season ends Nov. 30 with 18 named storms, six of them hurricanes with three of those Category 3 or higher.

One of those storms, Hurricane Dorian, made a direct landfall on Cape Hatteras the morning of Sept. 6. The resulting storm surge left catastrophic damage on Ocracoke Island, which will reopen to visitors for the first time since the storm on Monday.

NOAA’s outlook called for 10-17 named storms, 5-9 hurricanes and 2-4 major hurricanes, and accurately predicted the overall activity of the season.

“During each and every hurricane season, thousands of workers across the federal government coordinate with NOAA to safeguard Americans against the threat posed by hurricanes,” U.S. Secretary of Commerce Wilbur Ross said in a NOAA news release. “From advanced warnings to business aid, the Department of Commerce stands ready to help Americans from a storm’s formation to long after its dissipation.”

This year marks the fourth consecutive above-normal Atlantic hurricane season. The only other period on record that produced four consecutive above-normal seasons was 1998-2001. Also this year, five tropical cyclones formed in the Gulf of Mexico, which ties a record with 2003 and 1957 for the most storms to form in that region. Of those, three — Barry, Imelda and Nestor — made landfall in the U.S.

“NOAA provided around-the-clock support to communities before, during and after each tropical weather threat,” said Neil Jacobs, Ph.D., acting NOAA administrator. “The expertise of our forecasters, coupled with upgrades like those to the Global Forecast System model and our next-generation environmental satellites, helped NOAA and its partners save lives and protect property all season long.” 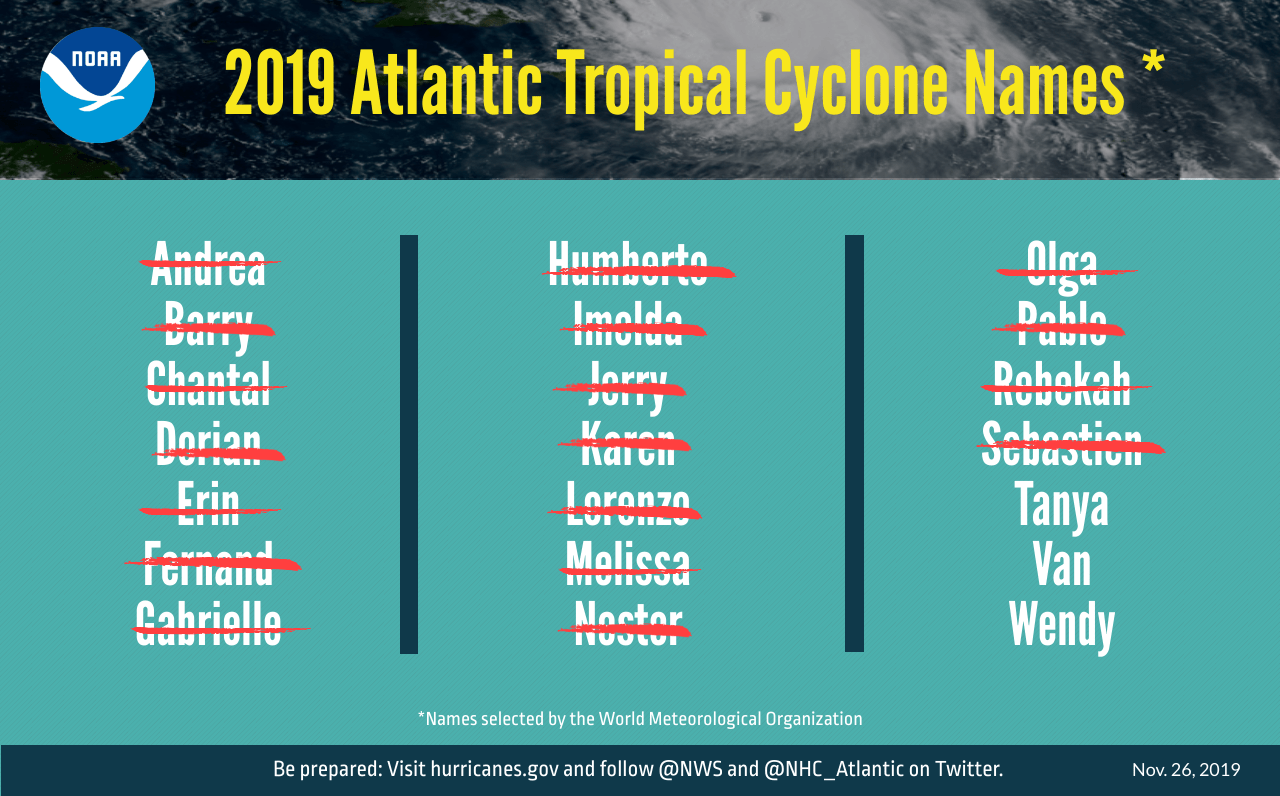 The three major hurricanes this season were Dorian, Humberto and Lorenzo. Hurricane Dorian is tied with three other hurricanes — the 1935 Labor Day Hurricane, 1988’s Hurricane Gilbert and 2005’s Hurricane Wilma — as the second strongest hurricane on record in the Atlantic basin in terms of wind (185 mph). In all, four storms made landfall in the U.S. during the 2019 season: Barry, Dorian, Imelda and Nestor.

“This season’s activity ramped up in mid-August during the normal peak of the season, as we predicted,” said Gerry Bell, Ph.D., lead seasonal hurricane forecaster at NOAA’s Climate Prediction Center. “The above-normal activity is consistent with the ongoing high-activity era, driven largely by the Atlantic Multidecadal Oscillation, which entered a warm phase in 1995. Conditions that favored more, stronger, and longer-lasting storms this year included a stronger West African monsoon, warmer Atlantic waters, and weak vertical wind shear across the western Atlantic and Gulf of Mexico.”

An average season has 12 named storms, six hurricanes, and three major hurricanes.During the 2019 season, NOAA’s hurricane hunter aircraft and crews flew 57 missions over 430 hours, which along with the 53rd Weather Reconnaissance Squadron of the Air Force Reserve, provided critical data that aided in storm forecasting and research.

NOAA and NOAA-supported researchers from the U.S. and Caribbean deployed 30 autonomous ocean glider missions in the Atlantic this season, which provided more than 75,000 observations of ocean temperature and salinity to operational hurricane forecast models. Ocean temperature and salinity data provide important clues about hurricane intensification.