The owner of a Tyrrell County seafood processor has been sentenced to one year in federal prison after pleading guilty to selling millions of dollars in foreign crab meat that was labeled as local blue crab to major retailers.

Phillip R. Carawan, owner, president and CEO of Capt. Neill’s Seafood Inc. in Columbia, admitted to telling workers to label more than 179,872 pounds of crab meat with a retail market value of $4,082,841 as locally-sourced.

Between 2012 and June 2015, the company imported crab meat from South America and Asia, and then relabeled it as being from jumbo blue crabs as a “Product Of USA”.

As part of his plea agreement, Carawan admitted that he and his company could not process sufficient quantities of domestic blue crab to meet customer demands.

The crab meat was then sold to wholesale clubs such as Costco and Sam’s Club and other retailers.

“Individuals and companies who seek to profit from the fraudulent mislabeling of seafood harm American fishermen and consumers,” said Assistant Attorney General Jeffrey Bossert Clark for the Justice Department’s Environment and Natural Resources Division. “We are committed to working with our law enforcement partners to hold accountable those who engage in seafood fraud and mislabeling.”

Carawan was sentenced by U.S. District Judge Louise Flanagan to 366 days in prison, followed by three years of supervised release. He is currently scheduled to begin his sentence until after April 8, and was also ordered to pay a $250,000 fine.

Capt. Neill’s was sentenced to a period of five years’ probation and is required to pay a $500,000 fine.

“Seafood mislabeling is consumer fraud that undermines efforts of hardworking, honest fisherman and the free market by devaluing the price of domestic seafood,” said acting U.S. Attorney General Norman Acker, III, for the Eastern District of North Carolina. “In this case, the fraudulent scheme artificially deflated the cost of domestic blue crab and gave Carawan an unacceptable economic advantage over law-abiding competitors.”

“The effects of this type of fraud impact not only the consumer, but also honest fishermen and the livelihoods of others in the fishing industry,” Landon said. “We will continue to identify and investigate those who seek to undermine the legal requirement to accurately label seafood products.” 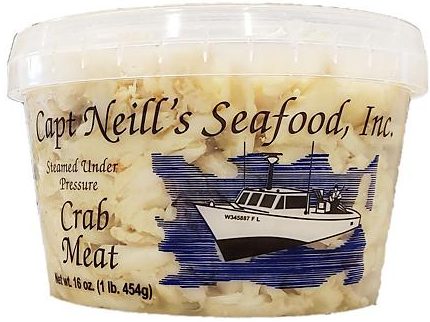 Restitution was being made to anyone the government confirmed purchased Capt. Neill’s jumbo crab meat between 2012 and June 16, 2015. However, the deadline to submit information passed on Jan. 7, 2020.

Further information can be found at https://www.justice.gov/usao-ednc/captneillsseafoodvictiminformationpage.

The maximum sentence for falsely labeling crab meat is five years in prison and a fine of up to twice the gross gain of the offense.

This case was part of an ongoing effort by the NOAA Office of Law Enforcement, in coordination with the Food and Drug Administration, and the Department of Justice to detect, deter, and prosecute those engaged in the false labeling of crab meat.