The owner of a Tyrrell County seafood company pleaded guilty Tuesday to a federal charge of false labeling millions of dollars of crab meat from overseas as a “Product of USA”.

According to federal prosecutors, Phillip R. Carawan, owner, president and CEO of Capt. Neill’s Seafood Inc. in Columbia, told workers to label more than 179,872 pounds of crab meat with a retail market value of $4,082,841.

Between 2012 and June 2015, the company imported crab meat from South America and Asia, and then relabeled it as being from jumbo blue crabs caught locally.

The crab meat was then sold to wholesale clubs such as Costco and Sam’s Club and other retailers.

“Seafood mislabeling is consumer fraud that undermines efforts of hardworking, honest fisherman and the free market by devaluing the price of domestic seafood,” said Acting U.S. Attorney G. Norman Acker III for the Eastern District of North Carolina. “In this case, the fraudulent scheme artificially deflated the cost of domestic blue crab and gave Carawan an unacceptable economic advantage over law-abiding competitors.”

“Seafood fraud and mislabeling can affect the economic value of our domestic fisheries,” said Logan Gregory, Deputy Director of the U.S. Department of Commerce’s National Oceanic and Atmospheric Administration Office of Law Enforcement. “Our office is committed to investigating these crimes to help ensure the economic value and sustainability of our fisheries.” 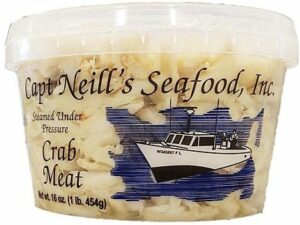 As part of the plea agreement before U.S. District Judge Louise W. Flanagan in New Bern, Carawan admitted he and his company could not meet the demands of customers for domestic blue crab.

Restitution will be made to anyone the government confirmed purchased Capt. Neill’s jumbo crab meat between 2012 and June 16, 2015.

Customers who want to check to see if they qualify for restitution or for further information on the prosecution can visit https://www.justice.gov/usao-ednc/captneillsseafoodvictiminformationpage or http://justice.gov/largecases.

Sentencing will take place in January 2020. The maximum sentence for falsely labeling crab meat is five years in prison and a fine of up to twice the gross gain of the offense, which has been calculated at $8,165,682.00.

Separate charges against the company are still pending, and a hearing is set for Sept. 11.

This case was part of an ongoing effort by NOAA’s Office of Law Enforcement, in coordination with the Food and Drug Administration and the Department of Justice to detect, deter and prosecute those engaged in the false labeling of crabmeat.